Heralded as the cradle of innovation and early adoption, the San Francisco Bay Area is now uniquely positioned as a proving ground for the future of work, and what the adoption of flexible office space will mean for companies and urban areas around the world.

In December, the New York Times published a story detailing how, post-covid, San Francisco is “the most deserted downtown in America,” noting that tech companies allowing staff to work remotely, or adopt a coworking model, have left some of the city’s most expansive office buildings empty.

“On any given week, office buildings are at about 40 percent of their pre-pandemic occupancy, while the vacancy rate has jumped to 24 percent from 5 percent since 2019. Occupancy of the city’s offices is roughly 7 percentage points below that of those in the average major American city, according to Kastle, the building security firm.”

In November, the SF Chronicle extolled how hollowed-out office space would potentially cost the city $200 million a year in lost taxes, while Bloomberg covered how SF Mayor London Breed had given up on attempting to incentivize workers to return to downtown offices and was working on attracting a greater diversity of businesses.


Market shifts forcing the city to reinvent its urban fabric is nothing new–SF’s boom and bust cycles started with the gold rush. And as more companies and knowledge workers adopt remote and hybrid models, flexible office space–represented in large part by coworking spaces like CANOPY–is emerging as a frontrunner in sustainable real estate for reducing occupancy costs, enhancing collaboration and the ability to scale, and increasing portfolio flexibility for investors and property owners. 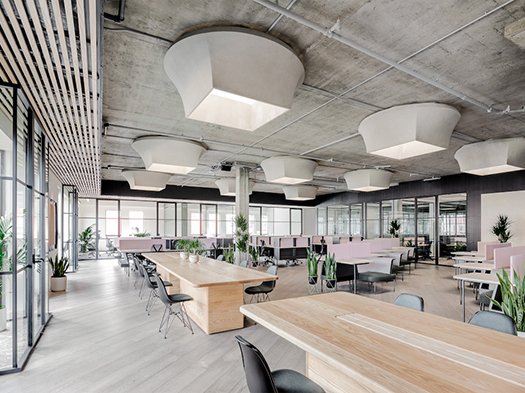 In competitive markets previously, five- to ten-year leases for floors and entire buildings was the norm, and large companies were prone to paying for more space than they needed–especially overfunded tech startups for which exponential growth was equated with success. When financing dries up during a downturn and firms tighten their belts to maximize runway, office budgets are among the first overheads to be axed. Enter coworking spaces, such as CANOPY, which offer a sustainable solution for companies seeking to meet short- and long-term office needs. Members can pay for only what they need, from single desks to entire floors, for periods ranging from hours to several years.

Because flexible spaces, by nature, are designed for diverse usage, there’s no need for costly rolling renovations to accommodate a company’s evolving needs. And flex office space has an impact on the city’s urban fabric, too: as property owners allow the reimagining office buildings as coworking spaces, rather than holding out for the big spenders of yesteryear to sign a lengthy contract, fewer city blocks will end up in foreclosure or derelict, keeping urban centers alive and thriving. 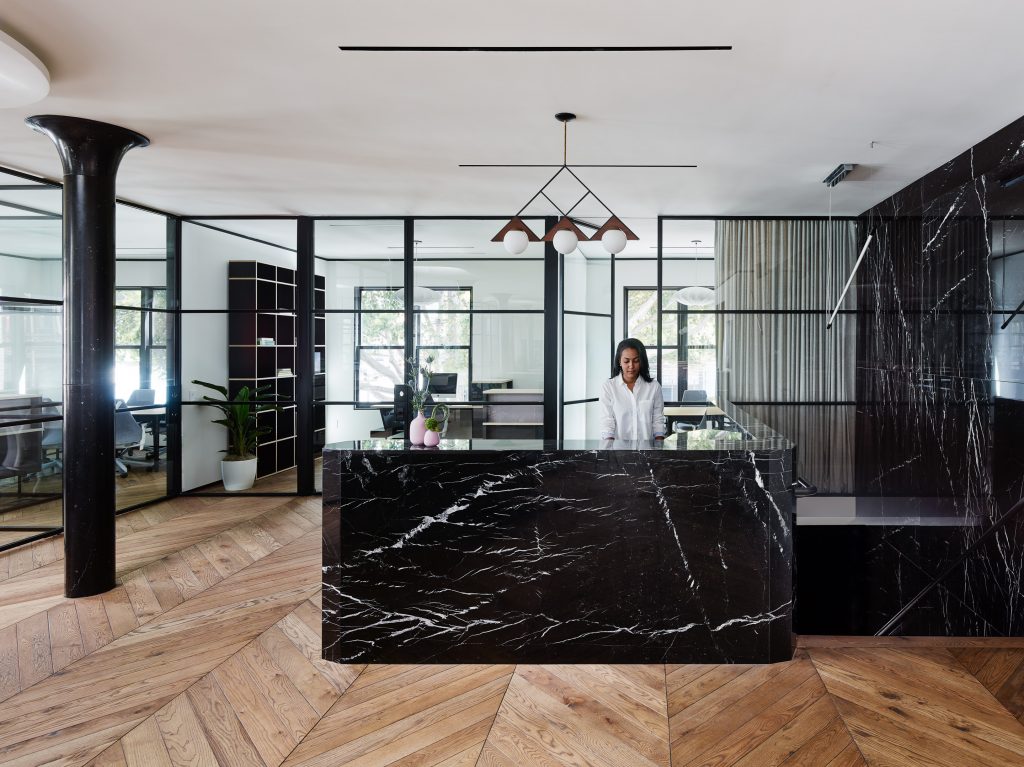 Hiring and keeping staff during growth periods is time consuming and expensive, as are making layoffs during tough economic periods now that boom-era contracts for many knowledge workers incorporate severance benefits. And, it goes without saying, workforce reduction has the knock-on effect of allowing companies to reduce their costly office space footprint.

Coworking spaces like CANOPY offer turnkey membership with concierge-style amenities where all auxiliary staffing needs are taken care of, from reception and mail room staff to janitorial services, reducing costs and headaches across the board and allowing members to focus on their core team. 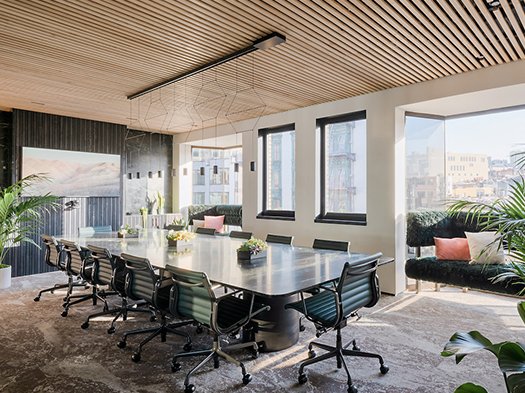 Competitive coworking spaces consider a diversity of companies’ every need, delivering a premium, design-focused setup that provides members with the best functional, ergonomic, and emotional space to do their best work. A focus on flexible long-term usage means that sustainable marble and solid wood materials can be prioritized over quick-fix, plastics-based solutions. As memberships allow companies to tailor their spaces immediately to their needs, coworking spaces can also invest in the best furnishings that will ultimately remain in the circular economy, rather than being dumped in wasteful “firesales” as companies scale up or down and relocate.

CANOPY’s co-founder Yves Béhar has designed workstations and chairs for Herman Miller for more than a decade, and CANOPY’s private offices and open-plan workspaces are furnished with the latest iterations of these designs, along with Yves’ own Public Office Landscape desks and Sayl chairs. 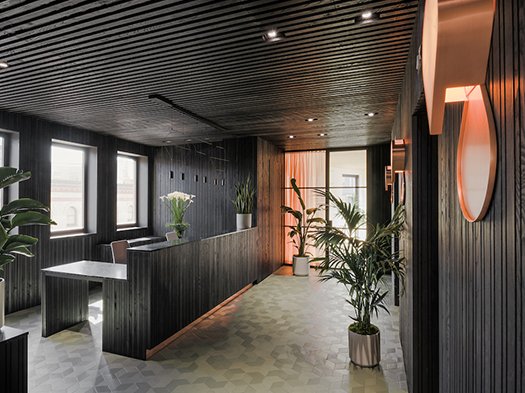 Access control systems can be installed throughout a building to prevent unauthorized users from entering and integrated with IoT devices to ensure that HVAC and appliances are turned off when nobody is in the space. Interiors by developer Presidio Bay and designer Studio Mortazavi at CANOPY’s new Menlo Park location exemplify spaces built to last through utilization of solar and carbon offsets, state-of-the-art air handling systems, and eco-conscious office materials.

Responsible use of shared resources 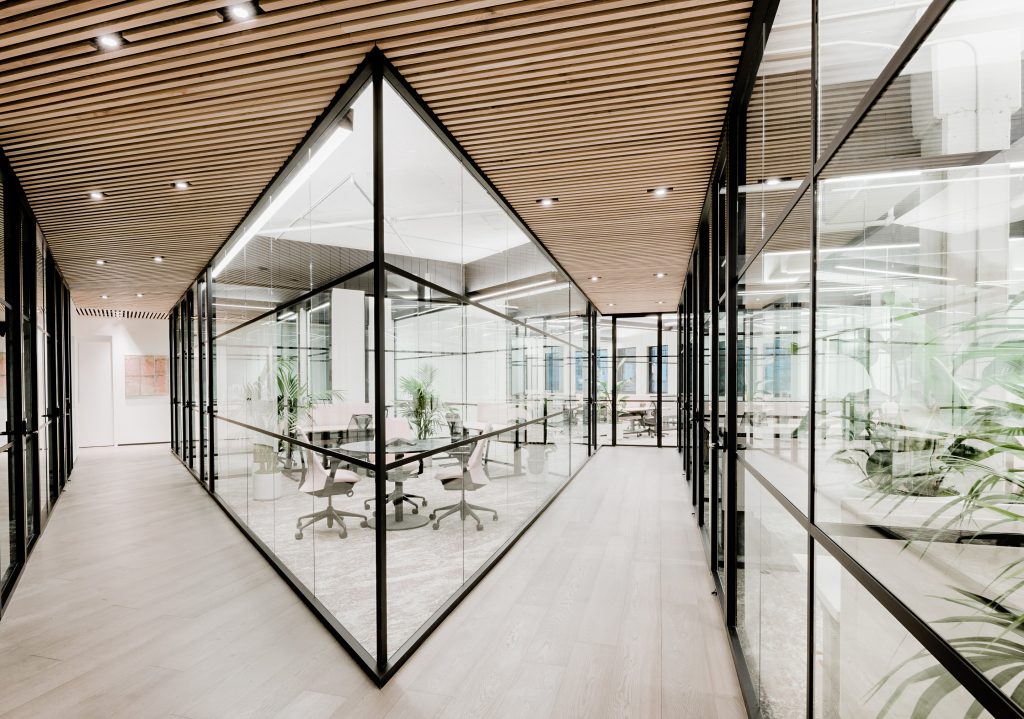 Environmental, Social, and Governance (ESG) factors have become incorporated into commercial real estate transactions across the board, and the more energy efficient a business is, the higher its ESG score. Renting coworking spaces–where energy usage is optimized and all resources shared and fully utilized–allows a company to reduce the amount of electricity and water consumed, and the burden of managing those resources.

Many enterprises have a policy of keeping office spaces illuminated and all equipment running when there’s nobody there, evidenced by SF’s city after-dark skyline. If the lights are on at 8 p.m. at CANOPY Jackson Square, CANOPY Financial District or CANOPY Pacific Heights, it’s because members are at work, taking advantage of flexible opening hours and the group’s convenient neighborhood locations (in turn helping to minimize commutes and associated carbon emissions).

Many coworking spaces also actively offset their carbon footprints. CANOPY has gone one better and become carbon positive, removing more carbon from the atmosphere than its operational footprint and members’ commutes put out. By purchasing credits via SeaTrees, CANOPY has helped to plant kelp forests and mangroves that protect coastal ecosystems while sequestering five times more carbon than land-based trees.

Other initiatives include working with pocket-forest organization Sugi to plant trees in Beirut, and supporting the Jacundá Forest Reserve project through Cool Effect, improving the conservation of the rainforest in Brazil while creating jobs and housing. CANOPY also prioritizes recyclable and sustainable amenities, serving Counter Culture coffee, which is sustainably sourced from cooperatives and villages around the world, and healthy snacks from SunRidge Farms in bulk to avoid wasteful single-use plastic packaging.

If you’re curious about how a coworking space can benefit your business, why not visit one of CANOPY’s locations and see the future of office space for yourself? Book a tour here.